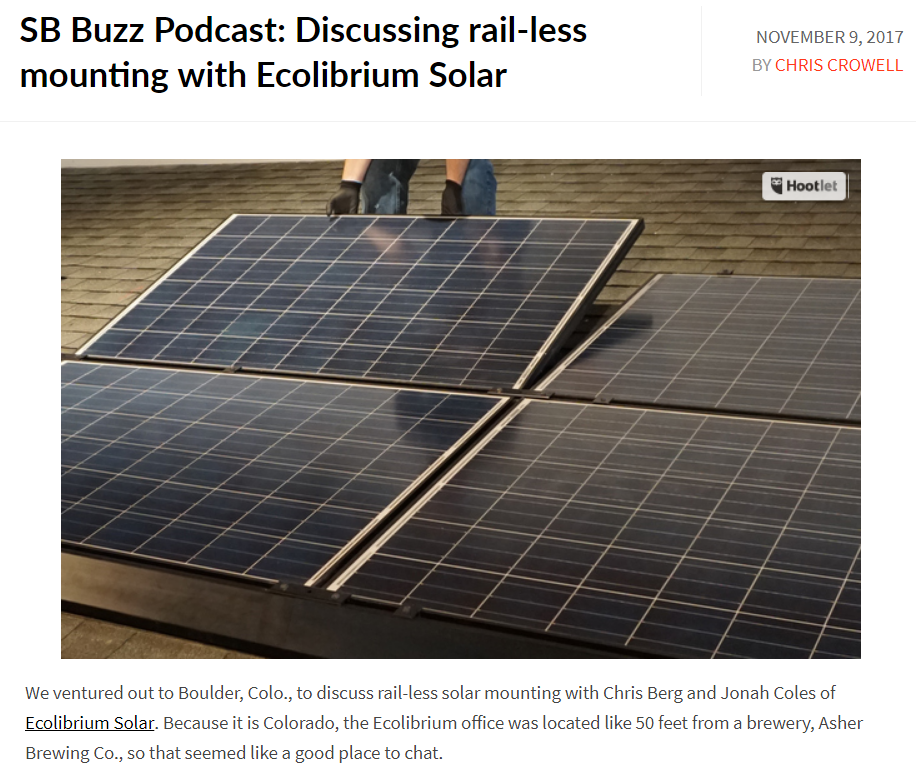 Recently, Solar Builder Magazine Editor Chris Crowell came to Boulder to talk with Ecolibrium Solar's Engineering and Product Solutions Managers Chris Berg and Jonah Coles. The resulting podcast, produced over a craft beer at next-door Asher Brewing, covers the UL2703 testing lab at Ecolibrium's Boulder facility, why rail-less racking will continue to gain ground as the racking of choice for installers, and myths about rail-less.

“One of the major benefits of having an in house testing facility is keeping costs down on product development and testing, but also controlling the timeline,” explains Berg. “From a prototyping standpoint, having a machine shop and running through prototypes and testing…we can move through iterations of idea generation, prototyping to a finished product much faster.”

In addition to testing prototypes, the company tests to qualify PV modules with their racking, according to UL 2703 standards. Ecolibrium Solar has added about 109 modules to their UL 2703 certification in the last 6 or 7 months. The listings enable customers and plan reviewers to see if the module specified is approved with EcoX Rail-less racking. “It’s a pretty big deal,” says Berg.

And, Coles adds, it makes the inspection process go smoothly and quickly.

In market acceptance, Coles believes rail-less racking is at the halfway mark. “It’s really taken a stronghold in the Northeast. Part of what got it there was the elimination of the rough inspection…with rail-less we don’t have rails for the inspector to look at, so that really provided a lot of the impetus.”

Coles says there is a short transition period in which installers learn a new process. Once over that initial learning curve, “by the end of the month they won’t want to go back,” says Coles.

One of the main differences between rails and rail-less is how wire management is done and the amount of time installers spend on the roof.

“With rail-less, part of the wire management is done on the ground, where with rail everything happens on the roof. With rail-less you can prop up a whole stack of panels against the house under a shade tree, install all of your power optimizers or microinverters to the panel before it goes up to the roof, and dress those wires. So it really reduces the amount of work you are doing on the roof,” says Coles. “It’s always safer to do something on the ground instead of on the roof.”

There is also the benefit of eliminating the rails, which decreases the shipping and logistics of not transporting and cutting 20’ rails to the roof, and it’s faster to install.

“Now we have customers who are doing two or three jobs in a day,” adds Berg.

When asked about the myths that surround rail-less racking, Coles says the perception is that rail-less is not as strong without the rails underneath.

“The fact is the module frame and the glass itself is incredibly strong. If you just take advantage of that material and that strength by connecting the modules together in a way that the structure carries from one module to the next, in my experience of walking on panels is that rail-less is much sturdier. Also with the requirements of 2703, we have the opportunity to communicate to our customers and jurisdictions that it actually is just as strong.”

Another myth Coles dispels is that rail-less is only good if you have a perfect rectangle.

“I feel it’s the exact opposite. I installed rail for years before I came to Ecolibrium and was introduced here to rail-less, and if I have a couple of offset rows of panels [with rail] I have to square up that rail every time I have a new offset panel. But the panel is square, so…as long as you’ve placed your mounts where the panel is going to cover…there isn’t any squaring to do.”

When asked what customers should look for when selecting a rail-less system, Coles and Berg note:

-Understand the type of attachment you need for different roof types, from metal to tile, and confirm the racking has the attachments needed for the installation.

-Look for racking systems that don’t require reaching over the module. EcoX Rail-less Racking has a hold-open feature, so once the clamp is tightened and the module is dropped in, the installer doesn't need to reach back over the module to tighten the clamp. The module is already secured. This is a significant safety feature, as well as an ergonomic and ease of installation feature.

-Buy a system that accommodates a wide range of module thicknesses, which range from 32-50 mm.

-Check that the racking has been tested with the module you are going to use. This prevents delays in permitting or inspections in your jurisdictions.

“The trend is that jurisdictions will require UL 2703 compliance. People aren’t going backwards, they are going forwards in requiring standards and UL2703 is the standard,” says Coles.

Listen to the SB Buzz podcast at http://solarbuildermag.com/news/rail-less-mounting-tips-with-ecolibrium-solar/

Back to Press Releases & News